8. Path of the Living

Swan dive into the water.
Survival Cache (9/14): Not far from where you probably end up you can find a Survival Cache on the ground of the lake, very close to the crate with salvage, on the sandy patch.
Resources: There is also a vein with gold ore in the cliff wall on the right (east) and some plants around the general area, as well as a resource container with +15 XP near the bridge.
Swim over to the left (west), to where a Porvenir pipeline and a bridge cross the lake and swim past underneath it on the left. At the end of the passage dive down and through the gap in the wooden barrier. You come out at a Trinity base of operations.

Get Past the Trinity Forces

Try to remain hidden from Trinity view. Dive around and look out for enemies to grab from beneath the water, using the melee attack. If you are seen, dive around, hiding behind walls and under jetties until the enemy loses sight of you, then continue picking them off one by one in stealth.
Trophies/Achievements: This encounter is perfect for working on a couple of trophies/achievements. If you have, by any chance, already unlocked the endurance boost skill "Heart of the Jaguar", use it now to further your progress with the Made to Endure trophy/achievement, which requires you to perform (stealth) takedowns while the boost is active. The same goes for Sixth Sense, if you have unlocked the perception boost skill "Eye of the Eagle", or In the Moment, if you have unlocked the focus boost skill "???". You can use several boosts at the same time if you have the necessary skills and resources required. A minor hitch is that you have to get out of the water to craft any of the mixtures needed for the boost. Stealth takedowns will help you with Like a Shadow and disappearing after being seen with Last Known Postion. All these can be farmed here, meaning you can kill a couple of guys, leaving at least one, then reloading the checkpoint. All kills will still be counting towards the achievement/trophy even after reloading.
Once you are done with the combat encounter you will be rewarded with +180 XP.
Survival Cache (10/14): Dive down and stock up on medicine and focus plants. Then dive down underneath the second jetty, where you can dig up another Survival Cache rewarding you with +25 XP.
Document (9/18): Climb out of the water and head up the stairs from the third jetty. Turn left. On the table you will find the document End Times from the set "Trinity" (1/10). It rewards you with +25 XP. There are also resources to find around here.
After climbing the stairs, follow the walkways away from the water.

You will be contacted by Jonah.
Base Camp (5/5): Lara discovers the base camp Docks, the final of the five base camps needed in this region, on the left and obtains +25 XP.
Document (10/18): On the crate just beyond the camp, also on the left side, you will find the document Croft Report from the collection "Trinity" (2/10) and you will get another +25 XP.
Follow the path into the next area.
Document (11/18): Search for a stack of equipment crates near the back of the lorry on the right side. There you can find the document Site Scrubbed, also from the set "Trinity" (3/10) and worth +25 XP. And to the side of the lorry you can pick up a resource container with +15 XP.
Get to the mud patch and use it to cover Lara in mud, and make her harder to spot. Then climb through the opening in the fence into the next area.

Another group of Trinity forces awaits you here. Use the mud walls and other hiding places to your advantage while taking them out, preferably without being seen. This is a good spot to work on the Marksman trophy (20 headshots) for a change, so get out your bow. But also kill at least one enemy from a hiding spot in the mud wall for First Blood. The first two can easily be taken out with an arrow to the head. The next to are in each other's line of sight. But you can separate them by distracting them with arrows into a nearby wall. Once one has turned away to investigate, take out the other, then the one investigating.

Make your way to the northern end of the area and get ready for the next encounter. Wait for the enemy closest to you to move to the left, behind the stack of crates, where you can kill him with a headshot with the bow, without his comrades seeing him drop. Next shoot an arrow into a nearby wall to separat the next two, before taking them out one at a time. Then take out the fourth and final enemy at the back.

Once you have looted all the enemies and collected all resources around the camp, get to the yellow Porvenir steel door. Pry it open.

Enter and jump to the craggy wall from where you rappel down.

Follow the sloping path down.
Document (12/18): In the next cave you can find the document Temple Survey from the set "Trinity" (4/10) on a table on the left. It rewards you with +25 XP.
Archivist Map: Then move over to the right where you'll not only find a resource container with +15 XP but also an Archivist Map worth +25 XP on a crate beneath the floodlight.
Step through the arch to get inside the ruins of the temple. Follow the passage and duck through the low tunnel.
Mural (8/10): When coming out on the other side, turn left. In the alcove immediately on the right you can find the mural Temple of Life from the set "Exodus" (5/7). You will get +35 XP and improve your knowledge of Mam.
Head down the temple passage to the right to enter the inner sanctum of the temple. Lara will speak to Jonah over the radio. Run down the stairs and approach the gate where you will get +50 XP.

Find a Way to Open the Gate

In front of you is a fiery pit and behind it a closed circular gate. On both sides of the entrance you find pillars which can be set to certain dates using the crank attached. Further left and right of the gate, across the fiery trenches, you can see two more gates with the one representing Ix Chel on the left and Chak Chel on the right. The first row on the door combination pillars has been set to 8 and 9.

Look over to the left portal. You can zoom in by using aim and zoom if you like. Besides a representation of Ix Chel you will find the number Zero (what looks like a shell). Get to the left crank and turn it clockwise once to set it to 0. A ledge is extended leading from the main walkway to the left portal. Walk across and push the button on the door mechanism to open the left door. Behind it you will find a big part of the door combination. Now get to the crank of the right pillar representing Chak Chel and use it to set the pillar to 1 (a single dot) by turning it clockwise once. Once again a ledge is extended, this time to the right portal. Just like with the left door, get over there and push the button to open the portal and reveal more of the door combination. Careful on your way back to the main walkway, part of the ledge falls away. Just jump across.

The next row of symbols appears on the pillars and the main portal has become accessible. Examining the combination pieces left and right, you will see that the third row has to be set to 0 on the left - turn the left crank anticlockwise twice - and to 3 on the right - turn the right crank clockwise once. Now walk up to the centre portal and push the button there to open it up and reveal another portal. You'll get +50 XP. If you've entered the wrong combination, the floor beneath your feet gives way. Quickly hurry back if that happens, or suffer the consequences.

Return to the pillars and examine the combination pieces on the left side again, which reveals that the next one is 0 (a shell) and 5 (a line). Turn the left crank clockwise twice, to set it to 0 and the right crank anticlockwise once, to set it to 5. Again get to the centre portal and push the button to open it.

Unfortunately here is where the clues in the niches left and right end. You will obtain +50 XP. Lara contacts Jonah who tells her that he might have the right date for Chak Chel. But first Lara has to find the date for Ix Chel. Get out the photo "Maya Date" from the set "Lara's Notebook", which Lara took in Cozumel. Examine it by looking closely at the damaged part on the left. The clue reveals that the last number on the left pillar is zero. Use the left crank and turn it clockwise once to set the pillar to 0. Jonah will inform you that the missing date is seven. So get to the right crank and turn it clockwise twice to set it to 7. 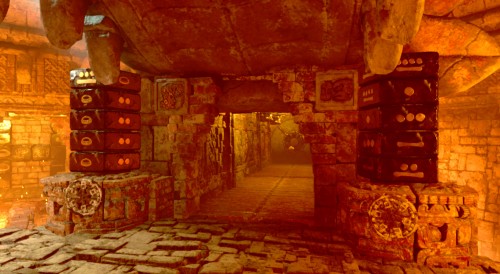 Door Combination
Now with all the dates properly set, enter the corridor leading to the centre portal one final time and push the button there to open the last portal. Step through the door and you are rewarded with +500 XP and the Fire of Life trophy/achievement. Head up the stairs to the large mural.
© www.tombraidergirl.com Personal use only, no reproduction. Last changes: 31 Oct 2018, 15:31