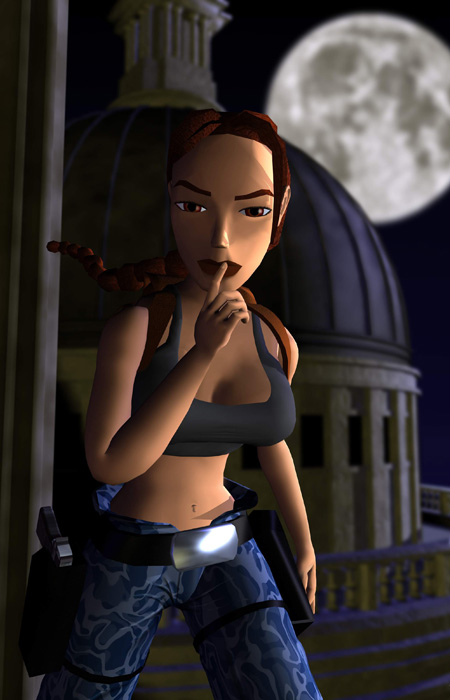 Hop right into the walkthrough. This walkthrough is very detailed and contains some pictures. I included all secrets and tried to include all goodies. (It is currently - in 2017 - being revised to add the missing ones.)
After playing the India levels, you are free to choose, where to go. It is however advised that you play Nevada next, as during this adventure you will be robbed of all your weapons. It would be sad to have collected all in London and the South Pacific just to lose them.
If you have any questions, please use our Forums (you can find the link at the foot of this page, or any level page). Don't forget to mention the game and level you are playing and give a detailed description of where you are stuck, to make it easier for us to help you.

Croft Manor
Before hopping into the game, the player can explore Croft Manor in Lara's Home and learn about her moves, especially the new ones: sprinting, crawling, and the monkey bar climb. Those three open up a lot of new possibilities. Combined with the dive roll Lara can use sprinting to quickly get through closing doors. Crawling and monkey climb open up new areas that would have been unreachable. You can also find the Racetrack Key to practise operating the quad bike in the garden.
The game itself begins in the jungle of India where Lara is hunting for the fabled Infada Stone. After obtaining it, Lara learns of the existence of three more artefacts that have all been crafted from pieces of a meteor that hit earth some time ago in what is now known as Antarctica and that where scattered across the world by sailors on the H.M.S. Beagle. Lara will hunt these down around the globe: the Element 115 in Area 51, Nevada, the Ora Dagger in the Temple of Puna, in the South Pacific, and the Eye of Isis in London, England. The adventure is then concluded in the icy region near the South Pole.

Kayak
Lara will use a number of vehicles during these trips. The quad bike will be utilised in India and in Nevada, the South Pacific introduces the kayak, in London Lara will find an underwater propulsion unit and Antarctica offers an inflatable boat and a mine cart. There is also a wide variety of enemies to be found: Baboons that will start off friendly, cobras, piranhas, tigers and Shiva statues that come to life in India. Nevada is dominated by vultures, rattlesnakes, Military Policemen and their dogs, and prisoners that stay friendly, as long as you leave them be. The South Pacific region presents you with an indigenous tribe that shoots poisonous darts at Lara, crocodiles, dinosaurs like velociraptors, compsognathus and a T-Rex, and poisonous lizards. London is dominated by crows, rats, guardsmen, the Damned, dogs, crocodiles and frogmen. Also each section has its own boss. Antarctica has a variety of men, dogs and mutated creatures, like the giant dragonflies and mutated humans.

For those who have tackled the game and found 59 out of 60 secrets the bonus level All Hallows awaits.

"The Lost Artefact" or in American English "The Lost Artifact" is a collection of add-on levels for Tomb Raider III that was published in March 2000. Lara learns of the existence of a fifth meteorite artefact, the Hand of Rathmore and travels to Scotland and France in search of it.