There are two novel serieses within the Tomb Raider Universe. Scroll down for the older Del Rey Novel series. 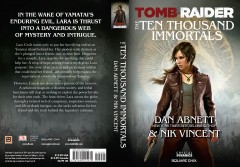 Description:
"Lara Crofts wants only to put her horrifying ordeal on Yamatai island behind her. Her modest wish shatters as she's plunged into a frantic race to save Sam. Desperate for a remedy, Lara searches for anything that could help her. A wisp of hope arising from a myth gives Lara purpose: the story of an ancient and mysterious artifact that could heal her friend, and possibly help explain the supernatural events she witnessed on Yamatai.

However, Lara is not alone in her pursuit of the treasure. A nefarious magnate, a shadow society, and lethal henchmen will stop at nothing to exploit the powerful relic for their own ends. The hunt drives Lara across the globe, through a twisted web of conspiracy, suspicious contracts, and life-or-death intrigue, as she seeks salvation for her friend and the truth behind the legendary talisman." -- Official Description

The events of "The Ten Thousand Immortals" take place between the game and the comics. (Source: Tomb Raider Blog)

Lara Croft and the Blade of Gwynnever

After a ruthless competitor beats her in a race to recover a priceless antiquity in Sri Lanka, Lara Croft returns home to London. Nursing her bruises, she gets a call from an old friend in desperate need of help and learns that something truly strange has been discovered during an excavation beneath the City of London. Investigating, Lara witnesses something so spectacular it could rewrite the history of the British Isles  and perhaps even the world  but is drawn into a dangerous shadow world of espionage, conspiracy and black market trafficking. Theres too much at stake. Lara sets off on a globe-trotting mission to recover a precious antiquity that links the modern world to ancient myths and legends, as old foes and new threats gather to stop her finding the truth. What is the true secret of the blade, who can she really trust, and is this the one mission even she cant survive?"


The fact that this novel is titled Lara Croft and the Blade of Gwynnever is a sign that it doesn't stick closely to the events of the games but jumps ahead to a time when Lara Croft has become an experienced Tomb Raider. Before its release, the release date had been moved back a couple of times.

The first was published between 2003 and 2004, by Del Rey and takes place after Tomb Raider IV: The Last Revelation. It consists of three separate novels.

The Amulet of Power

The Amulet of Power tells the story of how Lara escaped from Egypt, after being trapped in the Temple of Horus and how she sets out on a new adventure to find the Amulet Mareish. Her search brings her from Egypt to the Sudan. She spends a lot of time on a boat on the river Nile and makes friends with a local group.

Description:
"Here at last-the first exciting book in a bold new series of Lara Croft novels tying into the popular video games. The Amulet of Power reveals the never-before-shown events that took place between "The Last Revelation" and "Angel of Darkness". Trapped beneath the ruins of an Egyptian tomb, Lara faces certain death... until fate intervenes and sets her on the trail of an ancient talisman of power."

"Archaeologist and explorer Lara Croft travels the world in search of ancient relics, forgotten crypts, and lost cities. Highly trained for combat and possessing an insatiable appetite for adventure, she answers to no one and goes wherever the quest takes her-heedless of the danger."

"When Lara turns up in the Middle East, despite the rumors of her death, religious fanatics believe she has located the coveted Amulet of Mareish. Lost since the siege of Khartoum, the amulet is said to grant the wearer untold power. Some long to possess it, others want to see it destroyes, and both sides pursue Lara relentlessly. While she fights trained warriors and ruthless mercenaries, and desperately searches for the jewel they all seek, one thing becomes clear: The fate of the world rests in the hands of... Lara Croft." -- Official Description

Description:
"While on a mission for the CIA to recover stolen Iraqi artifacts, Lara Croft narrowly escapes death-only to be thrown into her next action-packed adventure."

"After destroying years of his research on the ancient Méne cult, archaeologist Professor Frys is murdered by an unknown assassin. Lara Croft knows her colleague must have stumbled upon a dangerous secret-and someone took his life to ensure it would remain in the shadows. So Lara jets to the mysterious cloud forests of eastern Peru, home of the Méne ruins, and makes a shocking discovery: A group is attempting to revive the sinister cult and its mind-controlling ways. One of the followers is Lara's former friend and failed protégé, Tomb Raider Ajay-and she is determined to see Lara silenced... permanently. But Lara, never one to run from a challenge, has other plans." -- Official Description

The Man of Bronze

Description:
"After completing a near-fatal mission in the mysterious cloud forests of Peru, Lara Croft flies to Warsaw to tackle her next assignment - and finds herself in the middle of an epic battle for the ultimate power."

"Reuben Baptiste needs Lara Croft's help transporting precious cargo. But before Reuben can reveal any details, he is murdered - and Lara signs on with Reuben's employer, the mysterious Order of the Bronze, to avenge his death. The Order shares with Lara its greatest treasure: a bronze android, thousands of years old, with uncanny abilities. But the android is crippled, missing a leg, and whoever finds that leg will gain astonishing powers. Hot on the trail is Lara's nemesis, Lancaster Urdmann, now working for an unknown employer with strange abilities. As Lara jets from Siberia to Australia to Rio de Janeiro, she is drawn into an age-old conflict of secret societies, intrigue, and death..." -- Official Description
© www.tombraidergirl.com Personal use only, no reproduction. Last changes: 24 Jan 2018, 18:46