Run ahead to where the wolf tracks come from. You will soon come to a part with slits in the walls left and right. These are Dart Shooters. Just continue running along, without stopping and you should make it past just fine. If you want to make sure not to get hit, make your way over to the left wall, where the floor is a little sloped, to get out of the shooting path of the two shooters on the right and jump over the two blowpipes on the left when they come up. Follow the bend around to the right. Here you can see the footprints coming down from the left.
Secret 1:

learn more
For the sake of the first secret, do not turn left yet, but instead run into the cave ahead. In the far left corner you will find a sloped block. Stand at the back of it. Jump up, hold on to the ledge and pull up. While sliding jump forward and grab the ledge. Alternatively you can stand below the niche, facing the wall and take a backflip onto the slope then jump to grab the ledge. Or, if you want to be particularly acrobatic, you could also jump onto the slope - facing slightly to the left- while running towards it. Climb into the niche. You will hear a sound indicating that you've found the first secret. Collect it. It's a Small Medi Pack. Leave the chamber again and backtrack to the place where the wolf tracks came down the slope.
Climb up the rocks. At the crossing, three bats will attack you, so shoot them. On the PlayStation the third one is fairly late, only appearing when you reach the archway leading down to the left.
Secret 2:

Run into the left part of the cave. In the right corner is a snow-covered part of the wall. Stand before the wall on the left end. This is where you can climb up to a higher level. Press up and action to do so; do not press jump. Shoot a bat, then collect the next Small Medi Pack. Climb back down and return to the crossing.
Run to the back of the cave. There is a path leading out and down to the left. Follow it.

Climb down the hill. Drop into the pit in the greenery and run down the stairs. There you'll find a door with a Wall Lever on the right. Use the lever to open the door. Enter the next chamber and shoot a bat. [Orientation] Run into the left corner and climb up onto the next level. Follow the path till you come to a part of the cave with two bridges. Stay up here but draw your weapons to shoot the two wolves running around below. Follow the walkway around to the right. Cross the first bridge. Run around the pillar and cross the second bridge. On the other side, turn left and enter the next room.

Advance towards the gap on the right. In the chamber underneath is a bear hiding. (Console gamers might want to make use of the save crystal on the opposite side, before going for the goodies.)
Goodies: Kill the bear in the pit underneath. Then drop down. Enter the next room and shoot two bats. Run towards the strange looking platform on the floor. This is a trigger for the door. Pick up the Small Medi Pack. Then step onto the marked platform to open the door. (It's a timed door so you have to be quick.) Run through. You'll end up in the cave with the bridges again. Turn right and run into the open. Run towards the skeleton-statue on the right. There you can climb up. You can also pull yourself up onto the second bridge. - Picture. Run over the bridge again and jump over the pit where the bear was.
PlayStation users can save their game at the save crystal located here. Before you run down the stairs run behind the pillars on the left and collect a Small Medi Pack. Then run down the stairs. Draw weapons and shoot the two wolves coming up the stairs.

Run down and collect the Small Medi Pack lying underneath the stairs.
Secret 3: Climb onto the platform in front of the closed gate. Go towards the left end. Make a running jump towards the green platform. Enter the chamber. Pick up the Large Medi Pack. Climb out again.
Climb up onto the platform with the lever. Use it. It will open the big gate on the other platform. This gate is timed, so hurry. Turn to the left and standing jump onto the block between this platform and the one with the gate. Continue to the gate platform. Quickly run through the open gate. If you fail, repeat this action.

Run up the stairs. Follow them to the right. Beware of the Dart Shooters. Shoot the wolf in the chamber at the top, on the left. Step onto the broken platform and drop through the crumbling floor. Turn right and run through the doorway. At the end, turn left and make a running jump over the gap. Turn left again. Run towards the medi pack. Draw weapons and shoot the wolf. Collect the Large Medi Pack. Use the lever in the chamber the wolf came out of. Return outside and go towards the first window on the right. Slide down the hill and run through the open gate.
X

(0) Find the sloped block in the corner. The entrance is above, to the left. (What you need to do is, slide down the slope and from there jump towards the entrance, to grab the ledge.)

1c
(1a) EITHER: Stand with your face against the wall underneath the opening in the wall. Backflip onto the slope.
(1b) OR: Stand behind the sloped block, a.k.a. behind the highest ledge. Jump up, grab the ledge and pull up to slide down.
(1c) OR: Run towards the slope aiming towards the middle part and jump onto it facing slightly left to land on it facing downwards.

Reached the ledge (3)
Either way, you should now be on the slope. (2) Immediately jump and hold down the action button, to grab the ledge of the opening. (3) Pull in and voila, the secret is up for grabs.

In my youtube video I have used the first method, as it is the more fluent one.
X

To your right is a wooden gate. There is no getting through here though. Behind it you see a trench lined with Dart Shooters and at the end the gate to Vilcabamba, our target. We need to get around the gate. If you follow this guide closely, you need not worry about the darts.

In my youtube video I linger here to show you the gate.
X 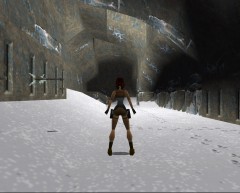 To overcome a dart shooter, run past with the right timing or jump over it. 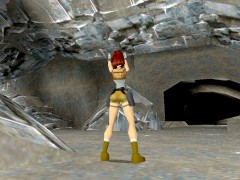 Bats (encountered in Peru and Greece) are fairly easy to kill. They only take a single hit with the pistols. Run around with your guns drawn unless you are climbing, and you should be able to dispose of them quickly. Once they attach to Lara's head, hop back or perform a role to get some distance between you and them.

Wolves (encountered throughout Peru) are nasty beast if they come too close and you get trapped in a corner. Before you get too close, make sure you can not shoot them from atop a rock where they can not reach you. Keep enough distance and while fighting you might want to perform backflips as to not let them get too close. Keep shooting all the while. Often wolves will appear in packs of two or three. 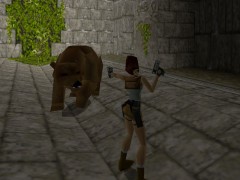 The bear is a tough fella. At this point in the game I don't recommend getting up close with him (as shown in the picture). Instead remain atop the pit and shoot him from up there.